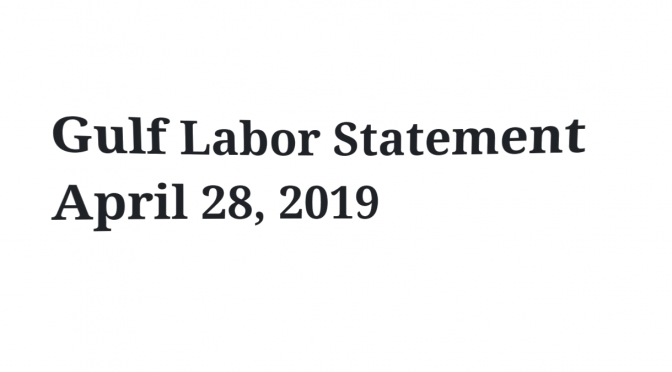 The Gulf Labor Coalition came together in 2010 out of a sense of necessity, to think collectively about our obligations, as artists, scholars, and cultural practitioners, to respond to the large-scale cultural developments being planned in the UAE.

We were inspired by the struggle for worker rights taking place by students and faculty around the construction of the NYU Abu Dhabi campus and asked ourselves what we as art practitioners could do to address potential labor abuses for the Guggenheim Museum’s planned Abu Dhabi branch.

We gathered signed pledges of artists from the region and beyond to withhold any participation, including the selling of their work, until the museum could address questions we had about labor standards. For those of us from regions marred by colonial abuse, extraction and violence, and long excluded from the collections of art by large-scale institutions, this request was not easy. We have sought an alternative infrastructure of art, deserving of the historical experiences in the region and confronting the challenges of the world. The events of the ‘Arab Spring’ have only made our position that much more undeniable.

What we asked was, in our eyes, quite modest. Before we agree to participate or include our works in such a collection, can you please insure that workers are not abused and are paid fairly, that they are not indebted by recruitment fees, that they are given decent housing and living conditions, and that they have the right to address grievances or abuses individually or collectively? We also asked for an independent external monitor to be in place so that we have at least a modicum of objectivity in assuring these conditions are met. Only the last of these requests was met, and not in a satisfactory way.

We are nine years into our struggle. During that time, timelines were shifted, and negotiations were attempted in many forms, first privately, then publicly. The museum’s leadership responded that our concerns were unsubstantiated. We conducted our own field research to prove otherwise. That work was rewarded by banning several of our members from entering the UAE. But we persisted in negotiations. Finally, after our proposals were designated as impractical, we made efforts to bring on board a team of professional organizations with long standing commitments and experience working on labor issues in the Gulf and South Asia. And exactly at this moment when the reforms we were demanding were made tangible and workable, the doors to our negotiations was unilaterally closed by the Guggenheim’s leaders and the period of wishful thinking on their part began.

Cynical as it may sound, it may be that these officials decided that by simply waiting and laying low for a few years, many of us might just get sufficiently distracted or burned out, lose momentum, or disband without an interlocutor or a museum to complain about. Or maybe the logic has been that enough of us will be seduced by the lucrative prices on offer for works, inclusive of artists who don’t care or remain in the dark about the welfare of the workers who will build and staff the museum to come. Or perhaps, if they wait long enough, people will simply forget the whole affair and move on. Hence, our attempt to provide a summary above.

This kind of cynicism may work in the short run, judging by the state of things globally, but we as Gulf Labor still believe that there is enough support and awareness on the part of the general public as well as in artists’ communities to stop this museum being built on the back of exploited, indebted, and abused workers. We expect more from cultural institutions today, and the struggles unfolding recently around the Whitney Museum’s board as well as the rescinding of funds by museums with ties to the Sackler Trust should serve as a clear warning to the Guggenheim that their reputation will be tarnished if they proceed to push the museum without addressing our concerns.

We have resisted making statements every time a director or some other spokesperson or architect has spoken about the project being ‘on again.’ But after being approached numerous times by writers and journalists, we make this statement as an update.

Gulf Labor remains steadfast in holding the Guggenheim Museum and Abu Dhabi cultural authorities accountable for any construction that does not meet the concerns for worker welfare that we, as a group representing several thousand signatories, have elaborated since 2010.