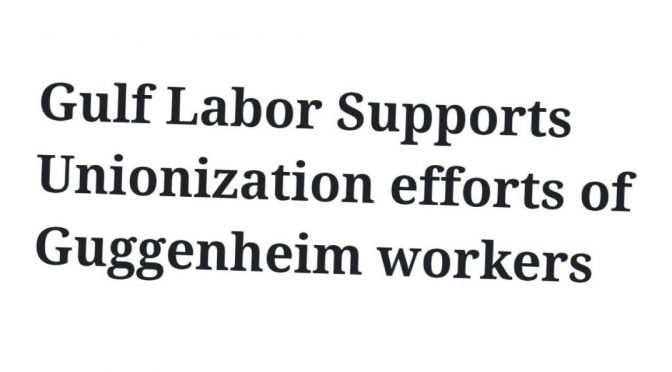 Gulf Labor Coalition (GLC) supports the unionization of Guggenheim New York art workers to join Local 30. We call on the Guggenheim to proactively support the workers who physically hang art on the walls, and make the museum run.

In joining this movement among the city’s art workers and securing the right of collective bargaining, the Guggenheim Art Handlers are upholding the dignity of their labor and struggling for fair pay in a city where real estate speculation and a bubble economy have already displaced many artists and art workers along with many more poor income residents.

Our position is consistent, whether in Abu Dhabi or in New York City: if an art institution wants to invite thinkers and artists to share their works, they should pay fair wages, create safe conditions for their workers, and take seriously their grievances or demands.

Museums are not only places for preserving and enjoying art; as workplaces, they also help sustain the arts community. Moreover, as high visibility institutions which purport to give place to the works and concerns of artists and cultural practitioners, the way they conduct their affairs including their treatment of workers, and their board members’ business practices outside their philanthropic endeavors is now understood as integral to this process.

The recent campaigns rejecting museum philanthropy from the Mercer, Koch, Mnuchin, Sackler families and Warren Kanders speak to the necessity for museums to govern themselves according to ethical standards that are in line with their missions, and the communities they seek to support and represent.

Growing inequalities connected to systemic disenfranchisement of workers rights over the last decades has given ample fuel to a global right wing populism which appeals to fixed notion of tradition, nationality, faith, and belonging to blame all the problems on the ‘others’, the ‘migrants’, those who ‘don’t belong’ and don’t share ‘our beliefs and faith.’ In this context, the struggle on the part of workers attempting to improve their conditions and in this case organize a union obviously offers a very different analysis and measure of resolving these inequalities. For this, we have been involved in addressing workers rights for more than 10 years and today support this struggle to form a union.