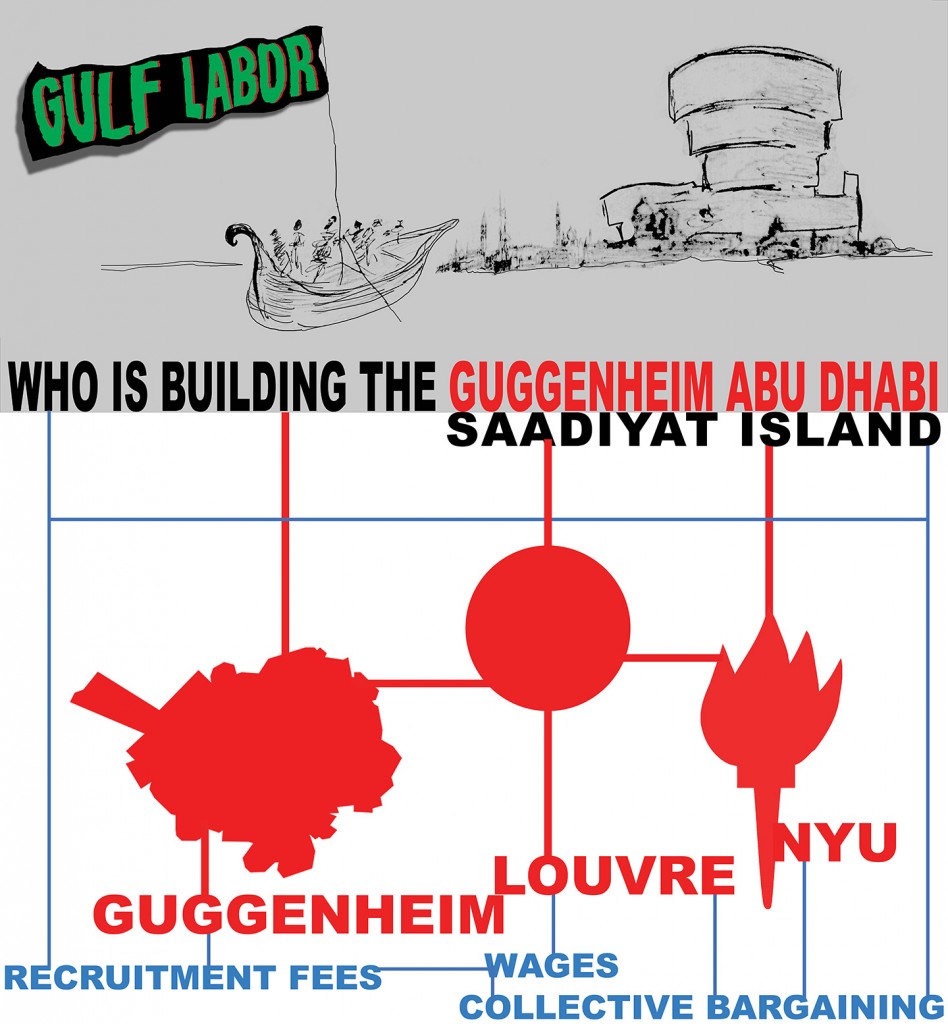 Gulf Labor Coalition is presenting three events at the Biennial including 1) a program of informational panels that will focus on our ongoing research into the nexus of art+labor+capital as it is congealing in Abu Dhabi and the UAE at the Arena, 2) a celebratory pageant  performance at S.a.L.E.-Docks and 3) the launch of our new book also at S.a.L.E.-Docks in only a few weeks. The program is as below:

All programs begin at 4PM in the Arena, the Central Pavilion except the Pageant on August 7th:

Operating on the principle that the freedoms of artists are connected to the rights of workers constructing and maintaining exhibition spaces, the Gulf Labor Coalition focuses on raising the labor standards of migrant workers building the new wave of museums in Abu Dhabi. Coalition members will present an overview of our campaign’s research and work. They will be joined on this panel by representatives of organizations with a history of involvement in Labor and Human Rights issues in the Middle East: Human Rights Watch, the International Trade Union Confederation, and the Office of the United Nations High Commissioner for Human Rights.

The Persian Gulf countries have been at the cross-roads of cultural exchange and trade between Asia, the Middle East and Europe for hundreds of years. Abu Dhabi and Dubai are cities made up of migrant communities from around the world, including millions of migrant workers from South Asia. Panelists will ask how to make the lives, desires and experiences of workers from India and other sending countries more visible within our discussions of workers’ rights in the building of museums and cultural institutions in the UAE and beyond. The panel will consider the history of migration and cultural exchange between India and the Gulf and the political and economic conditions that shape the difficult conditions of migrant workers in the Gulf today. Attention will be drawn to social movements within sending countries like India—and look at different mobilizing efforts by workers’ organizations, migrant rights groups, trade unions and other activist groups. Panelists will also discuss the larger world of coalition building as it relates to activism and organizing across borders following in the aftermath of the Arab Uprisings, Occupy Wall Street and Black Lives Matter.

No longer content to merely represent social transformation, artists are increasingly intervening directly in the sphere of day-to-day life, seeking to spark radical change. From the Occupy Movement to Tahrir Square, from Syria to Maidan to Black Lives Matter, as well as here in Venice with AB-Strike, an immediate and vibrant cultural agency appears to have awakened in such a way that it is often inseparable from street protests, strikes, political rallies, or other forms of mass resistance. Despite important similarities to past moments of resolute cultural opposition in the 1920s/1930s and the 1960s/1970s, the current activist art is self-organized and often unapologetically carnivalesque in spirit. The aim of this panel will be to explore these and other dimensions of what appears to be a new wave of art activism today.

The Gulf Labor Pageant and Book Party is a collaborative project involving members of Workers Art Coalition, the Aaron Burr Society, Occupy Museums, G.U.L.F., and Social Practice Queens (CUNY). It all startis inside  S.a.L.E.-Docks on the South side of the Dorsaduro where we will perform a deconstruction of Frank Gerhry’s proposed Guggenheim Museum in Abu Dhabi. Once this grand avant-garde monument is dismantled we will carry its liberated shapes through nearby streets and over canals and with music and chanting will pass by the Peggy Guggenheim Museum to the Gallerie dell’Accademia plaza where our emancipated geometric forms will be reconstructed into a public commons setting the stage for a series of testimonials and performances addressing the struggle for social justice amongst migrant workers in the United Arab Emeritis, as well as in Europe and the USA before returning to S.a.L.E.-Docks for the book party rolling-out:

The nineteenth-century reasons for exhibiting art in public no longer apply. Paternalistic ideas about educating the masses through art appreciation have been supplanted by the heady speculative trading of today’s global artworld, where museums, fairs, and biennales are nodes in the ultra-luxury marketplace. Whose needs do these institutions and mega-events serve? And what purposes do they (still) fulfil? Panelists will discuss the ongoing boom in museum-building and biennale-staging; the underlying economy of labor (both of artists and workers); and also the need for alternatives that safeguard the independent livelihoods of artists at the same time as they incubate the vital social impulses that the arts can channel and liberate.