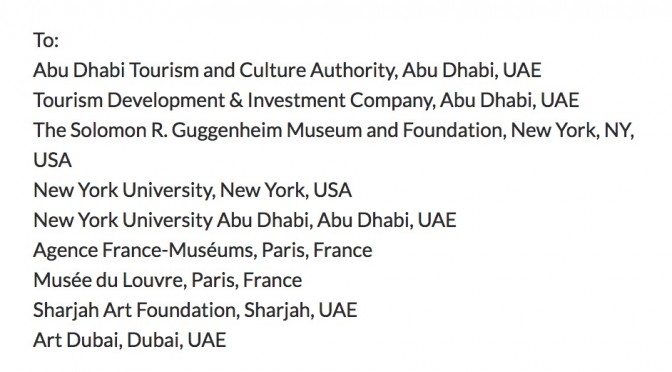 Recently, artists Ashok Sukumaran and Walid Raad were denied entry to the UAE on grounds of “security”. This comes after NYU professor Andrew Ross was similarly barred from flying to Abu Dhabi in March. Sukumaran and Raad have a long history of vital and sustained engagement with the UAE, often on the invitation of your institutions. Ross is a professor of standing in New York’s academic community. It appears that the reason these three members of our global arts and academic community were denied entry to the UAE is their involvement with the Gulf Labour Coalition.

As you know, Gulf Labour is an artist-initiated group that has been active since 2010, asking museums and institutions being built on Saadiyat Island to create better conditions for their workers. These conditions of the creation of a cultural world should be of concern to us all, and the proposals of artists in this regard should be seen as a matter of debate, not of “security”. We assert that artists and academics should be allowed free passage to conduct research and work that is done in a peaceful and productive manner.

We the undersigned oppose the barring of Ashok Sukumaran, Walid Raad and Andrew Ross from the UAE. We state that denying artists visas, stopping and deporting them after years of their work in the region, creates a chilling precedent and makes it difficult for arts and academic institutions in the UAE, and those working with the UAE to claim regional dialogue and artistic freedom. We urge your institutions to work with the concerned authorities to lift these bars on their travel.

5 thoughts on “Letter from sixty+ curators, critics and museum directors to UAE art institutions, and their affiliates”